Ever wondered what ‘boosting your immune system’ actually means?

Trametes versicolor (Turkey tail) has been long celebrated for its immune boosting benefits, having been utilised for centuries in the far East as medicine. In the West, however, we’re a little late to the party; Japan has been prescribing a compound derived from turkey tail as a pharmaceutical grade cancer treatment for decades.

Nevertheless, we’re catching up – and today Turkey tail has become one of the most researched medicinal mushrooms of them all, gaining quite a name for itself – particularly in the cancer research space. This is all thanks to a special compound in its cell walls that goes by the name ‘polysaccharide-K’, or ‘PSK’ for short. When you look at the science, it’s not surprising to see what all the hype is about…

The excitement around turkey tail’s PSK is largely due to its ability to support ‘immunomodulation’. Although the word may be a bit of a mouthful - the premise is pretty simple. Your immune system is not constantly running at full steam (that would be exhausting), instead it modulates itself, upregulating and down-regulating its activity as it needs to.

To make sure it can adjust its power settings, the immune system has communication lines between all its cells, and they use a language of their own to do this. Cytokines are the language of the immune system; small proteins that make sure that messages are delivered from one immune cell to another, providing instructions for each cell’s next course of action. They can deliver the noise of an alarm bell, kicking immune cells into action, or they can instruct them to chill out, thereby downregulating the whole system.

Amazingly, turkey tail’s PSK has been found to stimulate the production of such cytokines… It can assist in providing your immune system with the means to communicate well amongst and between its cells. This means it can help it to upregulate or downregulate its activity, helping to ensure your body is responding appropriately to an attack on the immune system, however big or small.

Interestingly, this ability to induce the production of cytokines suggests turkey tail’s PSK could be used as a vaccine ‘adjuvant’ (Engel et al., 2013). A vaccine adjuvant is often included in vaccine shots to enhance the body’s important immune response, to make sure the vaccine can work as well as it possibly can. But this isn’t all PSK can do.

So, let’s talk about T-cells! If cytokines are the language used to transfer the information to immune cells, T-cells are the town criers, shouting in the language of cytokines and raising the alarm bells. It’s important for the immune system to have these alarm bells, to know when it needs to upregulate its activity to fight off something nasty. So, as well as stimulating the production of cytokines, there is also evidence to suggest that PSK can enhance the proliferation of our all-important alarm-raising town criers, the T-cells.[3]

Turkey tail has another, similar compound that – like PSK – has been extensively researched. Also a polysaccharide, this compound is named ‘PSP’, and evidence suggests that both PSK and PSP have antiviral properties. Amazingly, PSK and PSP have been shown to hinder HIV-1 activity by stimulating natural killer cells and preventing the virus attaching to our all-important T cells [12].

However, further research is needed to explore whether these results can also be seen in experiments using a living organism, as well as in cells in a test-tube lab study.

For turkey tail’s PSP, evidence suggests it has a role as a prebiotic [13] . A prebiotic is any substance found in foods that supplies and nourishes ‘healthy’ bacteria in our gut, encouraging their growth. There is even some evidence that turkey tail extract can limit the growth of harmful bacteria, including those residing in the gut [14]. 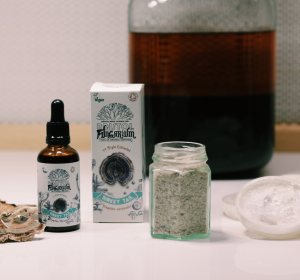 Mushroom Allies To The Rescue!

So, the next time you feel run-down, consider doing your amazing immune system a favour with the power of mushrooms. When it comes to turkey tail, you can’t obtain its powerful compounds by ingesting the fruiting body as it grows in the wild, but not to worry – we’ve done the hard work of triple extracting and bottling it up in our potent 1:4 ratio turkey tail tinctures.

More on the meaning of what on earth 1:4 ratio actually means, and what our triple extraction method is all about, in another post!